This is the best Top-Down Rougelite I've played in the past month!

@prox i need someone to make me a 2d game for a music project release. want to talk? i like you stuff.

maybe I’m too stoopid but how do you do that?

If you insist :P

Feel free to send me an email; pryxxer@gmail.com

Yo will see me as marcell kámán

I forgot to tell yo who am i

please give a little description of all the modifiers on weapons (for eg. I still have no idea what "painful" or "cursed" are supposed to mean)

Melle hits the opposite direction

Ranged shoots from wall towards you

And can you add controller controls

Controller support was considered, but it wouldn't work well with a lot of the game's mechanics

and i got some laundry thingi i have finally beaten that weird eyeball protogent guy

can you add controller control?

tradition is a not very hard achievement.

the text for the number challenge is actually impossible to read. game unplayable.

That's a bug, try the downloadable build instead. :)

disable pixel filter worked for me it was imposible to see anything

bought revive and then insta die and i have only a stick

They hold a grudge against you if you've robbed a store before. :D

i had a stick

but it was fast stick

you could run in circle around him

btw ducks and mini shopkeepers are the best items

hey theres a glitch where when the first boss splits into 2 little guys the spawn in the wall can you make it to were the take damage ouside of the boss ring ???

Hey, thanks for letting me know! I'll patch that in the next update. :)

lol i found an apple

how did you make the music what did yo use

and why does el pato potion spawns me a second duck

I used Famitracker for the soundtrack and the el pato potion spawns a duck. :)

thanks for telling me what do you use. i'll try making game music but i didnt get any good editor yet

el pato made me a duck lover

your duckies are very fun

are you able to make the game avaiable for linux or game engine cant do that?

If you scroll down there should be a downloadable Linux version, but I haven't tested it yet

They are in key with the music

Reply
waluigi yo118 days ago

Do all the costumes have different effects, or is it just for cosmetics? I can't tell.

They are purely cosmetic :)

Aw, I thought they'd be, like - the equivalent of choosing characters. In any case, the game's really cool!

There were supposed to be modifiers for each cosmetic option but I scrapped that because it was way too ambitious. Haha

E. g. the broken skin combination would let you play a hard mode of sorts where you'd only have one hp bar and one item slot

I suppose if you ever feel like it, that could be material for a future update, eh?

It's tempting for sure but you put it pretty well, I'm pretty much done with this xD

There's a nasty bug in the second world where spike tiles can be rendered as ice tiles. I think this counted for a few inexplicable deaths in that world, including the opening room! The screenshot below hopefully illustrates an ice tile appearing in a layout where there's supposed to be a spike tile. Certainly, if you step on that ice you take damage. 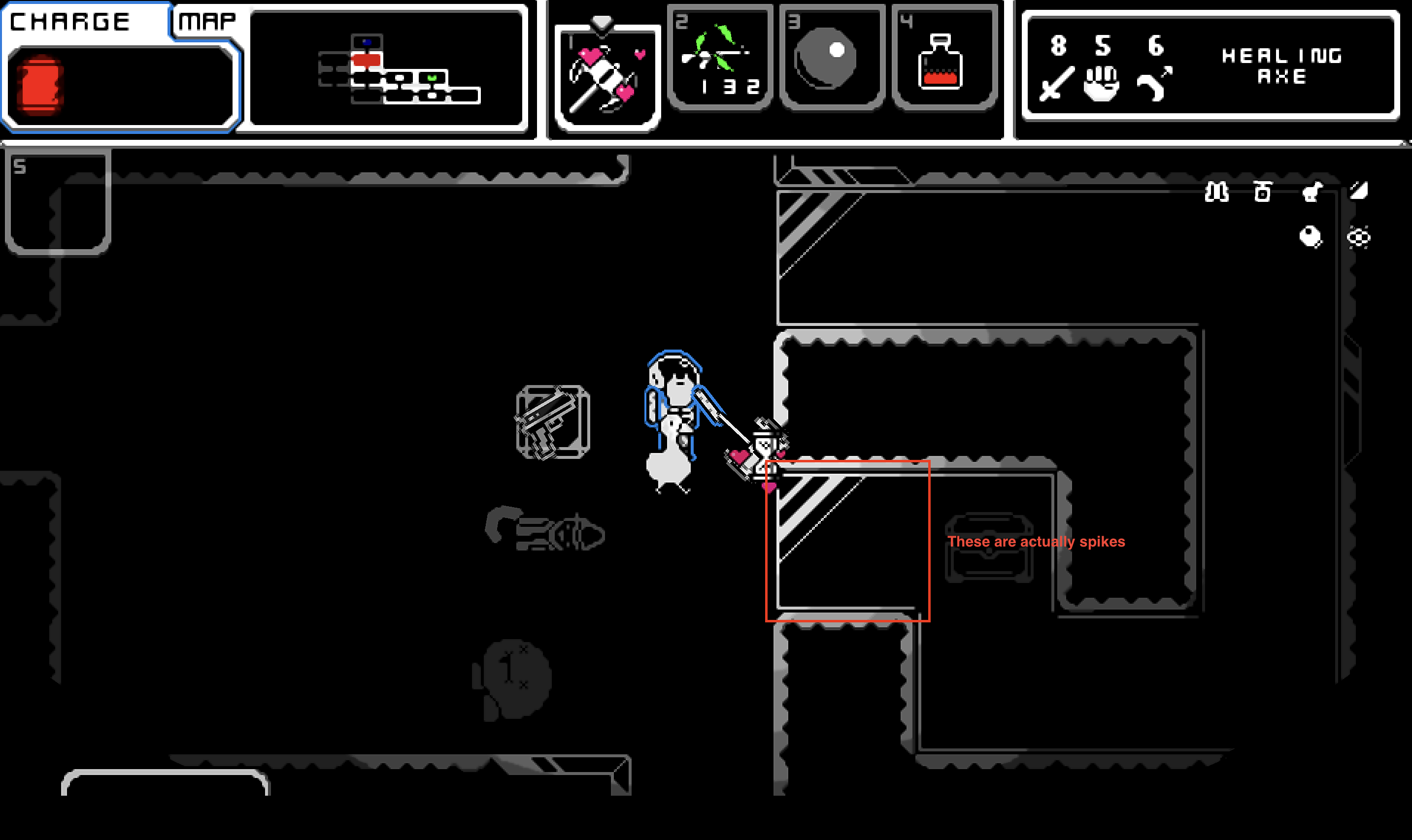 Thanks for letting me know! That will definitely be fixed soon! :) 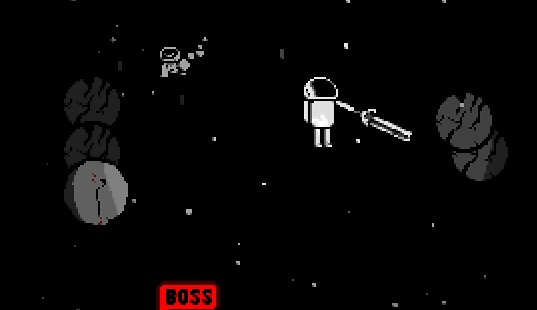 It only took 127 attempts and some liberal bonesawing, but I finally beat the last boss. It's a really fantastic game :)

If it's helpful, there's a few minor gripes I experienced but please set this against the massive amount of enjoyment already in the game:

* In the first world and third world particularly, it's annoying when you walk into a room and immediately take damage from a ball-and-chain or pop-out spike, especially if you're quickly back-tracking through rooms you've already cleared. I wonder if you could do some code-magic in certain circumstances so that it's impossible to enter a room and hit one. I guess I should've been more careful though, so it's not exactly unfair :)

* If it doesn't affect balance too much, could the game lean into the player's playstyle a little more? If I'm primarily using a melee weapon, it's a bit of a bummer to continually get ammo boxes out of crates. It's not that they should never appear, just that the weighting could be dialled up and down depending on whether they're going to be used.

* Shops with one to two items in them are a bummer, especially early on.

* Sometimes the bolt-sink (the postery thing that says 'Done T' in shops?) doesn't give you anything, even if you fill it to completion. I think this happens on later floors when you've already got some items from one on an earlier floor.

* I wish the Duck buff triggered immediately on entering the boss room. There have been a few times where I've died before getting any health back.

* If you attempt to pick up an item that overlaps the Sell box in a shop, it gets sold instead — I think. It's only happened once but it stopped me duplicating all my passives :(

* The jump pads in the third world feel hard to use consistently. I seem to often take damage from adjacent lava, and doing diagonal jumps in enclosed spaces is also tricky.

Aww! Thank you so much! Not a ton of people stick around for that long but I'm happy you're one of the few to make it to the end! :)

A lot of very insightful feedback here! I'll be releasing a new update soon that should adress most of the things you mentioned. Should be out by Saturday.

EDIT: Forgot to mention this, the Donet thing is a donation machine. Whether you get something or not is pure RNG, but filling it up multiple times will grant you a special chest in the forth level.

Really enjoying this so far, but does the currency pop-up in the bottom left corner have to pop-up on to the screen? It's super annoying not being able to see the corner of the room, especially if there are wall spikes or something like that get obscured by the giant info box. Perhaps I've not got far enough into the game for that UI real-estate to earn its keep, but couldn't your currency be tracked somewhere else that doesn't require it to intrude into the playing area?

I've thought about that too. You can expect an update that will improve on that soon by forcing you to click the pop-up to see how many bolts you have. :)

I was on the struggle bus for most of this but beat the first level at the end!

will an android version be released?

Sorry, it would lag like hell and controls would be awkward. :/

Yeah, linux support is definitely a bit iffy. :/
You can always try the web build though: https://www.newgrounds.com/portal/view/854391

The weapons are randomized in name, looks, stats, type, modifiers, sound, ammo and other aspects. The randomizer tries it's best to adjust these parameters to make weapons that are balanced and fun to use. :)

Please add an android version. I don't if you're looking forward to do it already, but i would love to try the game myself after seem the retromation(YouTube channel) gameplay

Glad to hear that you're interested in trying it! :D

Sorry, but I won't be adding mobile support. Performance would be a huge issue as the game would lag like hell and a touchscreen would make it near impossible to play.

Love the game, however I can't drop items for some reason

You have to right click on an item to drop, I know I didn't make that entirely clear. :)

Beautiful game,  but I love the Binding of Isaac so I may be a bit biased. The graphics, text and items are amazing; as the others said, I would review the controls, bc it's really hard atm.

I'm really busy atm but I'll look into it as soon as possible!

Hey, now that you died to it you know. :P

You learn from experience.

It would be nice to support ZQSD layout. It's not really playable with forced WASD.

I'll see what I can do. In the meantime I'd recommend changing your keyboard layout before and after playing. :)

I'm an ESDF player so it's an for me as well. It would be great if you could get rebinds working. Swapping keys with PowerToys is definitely an option, but a suboptimal one.

Otherwise the game is pretty dang good, especially for something that started as a student project. I think the movement still needs tweaking but it's remarkably professional, fun, and has a great sense of style.

I can't promise anything just yet but I'll try my best. :)

Update's out! You can remap controls in-game now. :)

The game's good. I don't know what else to tell you. It good.

Pretty difficult game, but it’s a fun time! I just really suck at it.

The following is all based on just the 1st level, which I didn’t even beat so keep that in mind when reading the following opinions: I like the different weapons and abilities you pick up along the way, they’re pretty neat and interesting! There is a bit of resource management when it comes to these items given how limited some of their usage can be. The enemies can be a bit tricky especially when mixing them with the brutal amount of traps in each room. A part of me feels like some of these traps are a bit… cheap? But it does feel like there are ways to prepare yourself for each one so I’m a bit on the fence about them. I definitely felt like I was getting better at the game and more knowledgeable each death though, which is a great feeling. Lastly, the options menu had some nice features as well. (Thank you for having a toggle for screen shake!)

I did run into an issue where volume levels weren’t equalized. For example,the main menu’s music was louder than in-game’s music volume and some of the other menus.

Overall, I can definitely sense your passion in this game, it’s a fun time! I might come back to it when I’m looking for a rougelike to grind through! Great job on this!

Thank you so much for your extensive review! It means a lot! :D

I've been thinking a lot about decreasing the game's difficulty (Or at least the difficulty of level 1) I 'm still very much conflicted on this but there will probably be a patch addressing this very soon.

For most people it took around 5-10 hours to complete their first run, which is definitely a lot of time to ask for and since you learn most on the first level it's where you'll be spending most of your time, which can definitely  make the sense of progress diminish. Of course I also do want people to see as much of the game as possible so striking a balance between difficulty and accessibility is a challenge.

what engine does this game use?